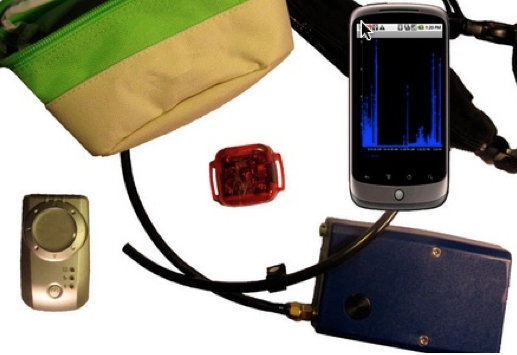 The project BREATHE (European Research Council Grant Agreement number 268479) studied whether exposure of children in primary school to traffic-related air pollutants is associated with impaired cognitive development. As part of the study they gave mobile sensors to students to assess their exposure to black carbon on their trip to school. Results were published in Environmental Science & Technology (2015), from the publication abstract:

Novel technologies, such as smartphones and small personal continuous air pollution sensors, can now facilitate better personal estimates of air pollution in relation to location. Such information can provide us with a better understanding about whether and how personal exposures relate to residential air pollution estimates, which are normally used in epidemiological studies. The aims of this study were to examine (1) the variability in personal air pollution levels during the day and (2) the relationship between modeled home and school estimates and continuously measured personal air pollution exposure levels in different microenvironments (e.g., home, school, and commute). We focused on black carbon as an indicator of traffic-related air pollution. We recruited 54 school children (aged 7–11) from 29 different schools around Barcelona as part of the BREATHE study, an epidemiological study of the relation between air pollution and brain development. For 2 typical week days during 2012–2013, the children were given a smartphone with CalFit software to obtain information on their location and physical activity level and a small sensor, the micro-aethalometer model AE51, to measure their black carbon levels simultaneously and continuously. We estimated their home and school exposure to PM2.5 filter absorbance, which is well-correlated with black carbon, using a temporally adjusted PM2.5 absorbance land use regression (LUR) model. We found considerable variation in the black carbon levels during the day, with the highest levels measured during commuting periods (geometric mean = 2.8 μg/m3) and the lowest levels at home (geometric mean = 1.3 μg/m3). Hourly temporally adjusted LUR model estimates for the home and school showed moderate to good correlation with measured personal black carbon levels at home and school (r = 0.59 and 0.68, respectively) and lower correlation with commuting trips (r = 0.32 and 0.21, respectively). The correlation between modeled home estimates and overall personal black carbon levels was 0.62. Personal black carbon levels vary substantially during the day. The correlation between modeled and measured black carbon levels was generally good, with the exception of commuting times. In conclusion, novel technologies, such as smartphones and sensors, provide insights in personal exposure to air pollution.

The study showed that it’s hard to model exposure accurately through modelling alone and so mobile sensors can help improve understanding of exposure to air pollution. This is a great example of why and how mobile sensors can be used to assess air quality. For more examples please see the GCS page Crowdsourced Air Quality Data.