I just watched a fascinating presentation “What’s on the Minds of the Leaders of the World’s Top Mass Transit Agencies?” made by Juliette Michaelson, Director of Strategic Initiatives, Regional Plan Association (New York Area) at the 2012 Meeting of the Minds conference. Here’s the introduction from the conference report:

In 2012, Regional Plan Association brought together the chief executives of publictransportation agencies from New York, Los Angeles, São Paulo, London, Hong Kong and seven other world cities for a candid, off-the-record dialogue. What strategies and technologies are transit executives adopting to improve their systems? What obstacles do they face?

Michaelson presented these ideas in terms of several innovations. Here’s my summary of her presentation with some of my own comments (indicated with AN). Links to the presentation and more information from Meeting of the Minds.

According to Michaelson, many cities have this type of fare card data but not everyone is using the data as well as they could be.

(AN: Professor Nigel H.M. Wilson and his colleagues at MIT have done a lot of work in this area.) 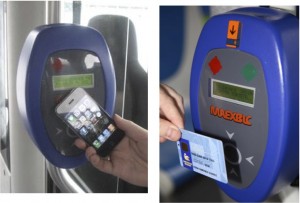 Fare cards have lots of advantages for transit operators and so they are being adopted rapidly.

One idea discussed by the operators at the meeting was using fare cards to help improve equity (e.g., low income people pay less for public transport).

Several cities are experimenting with non proprietary fare cards: e.g., tap and go (NFC) credit or debit cards. The advantages: (1) reduced administration for transit operators; and, (2) easier for customers (no need to buy a new card for every city). London experimented with the idea during the Olympics and plans to begin introduction next year.

Many cities have opened their data to private developers. This has led to a huge number of privately developed applications saving public transport operators time and money. Plus these applications often solve real customer problems.

Oddly some cities and agencies still refuse to open their data. Some cite security concerns although it seems strange that some of the world’s most security conscious cities (New York, Washington, London, etc.) are pretty good in terms of releasing data.

Unfortunately, what’s seems to be needed is culture change at many public transport agencies (see also 7 below).

(AN: An interesting comment from Transport for London’s Simon Reed at the ITS World Congress 2012 was that it was becoming impossible for London to keep-up with server demand needed for real time transit information, the problem was solved by providing an API for the data and allowing private developers to develop their own apps.)

Michaelson described Hong Kong as a leader in this field. The Hong Kong MTR has a very extensive advertising program (including television) and even has built “opinion zones” in main stations where customers can drink a coffee with MTR staff and discuss problems. Their goal is to develop an “emotional connection” with their customers.

She showed a great commercial where a track inspector discusses his job. It’s embedded below. Here’s another one I found on YouTube, sorry no English translation, but you’ll get the idea. Hong Kong MTR Advertisment

Many cities are looking to social networking to help in customer service and branding.

(AN: I’ve argued that we are still in the early stages of using social networking in public transport. There are far too many transit agencies that think social networking means having a lot of people “Like” you on Facebook. But real emotional involvement means more. Fostering emotional engagement is one of the goals of my GreenCityStreets.com project.)

Michaelson also mentioned Washington Metro which is developing a MindMixer project for improving their system.

The specific governance problem Michaelson mentioned was coordination of services and fares. She described the recent changes made Santiago (Chile) as a good example of how government can help improve coordination. In Santiago the government helped buy new vehicles, increase coordination and re-organize routes to be more efficient.

(AN: Public transport coordination is very difficult. Everyone agrees it needs to be done but no individual agencies want to give up any independence. My favorite example of making coordination work is in Zurich. The agencies there did not want to do it either but were forced to by a local initiative. Today it’s considered a great success story and is part of what makes Zurich’s public transport system the best in the world.

The neat idea from Zurich was to create a new agency that “buys” service from the region’s 43 different public transport operators (city bus operators, the national railway, etc.). The new agency (Zurich Verkehrsverbund) tells the local agencies what service to operate and how it wants this service coordinated. The operators and ZVV negotiate cost and service standards. Then the ZVV pays the operating agencies and receives all the fare revenues.

What I find most interesting about the Zurich system is that it allows the local transit operators to focus on operating the service rather than the high level strategic coordination and fare collection issues. These are decided on a regional level. I wrote about Zurich’s system in my report Implementation of Zurich’s Transit Priority Program for San Jose State University’s Mineta Transportation Institute.)

According to Michaelson, many public transport agencies are redefining themselves as “comprehensive mobility providers”. She pointed to London as a good example. There TfL (Transport for London) is involved in planning all aspects of the transport system including the city’s highly innovative congestion charging system.

(AN: I believe that TfL is similar to the ZVV in the sense that it does not actually operate service, but rather is a planning and funding agency which might make taking this broader view easier (please correct me in the comments!). In my experience I think it’s hard for public transport service providers to focus on long term planning and strategy since the day-to-day operations are very demanding. Perhaps regional agencies charged with supporting comprehensive urban mobility solutions is the answer?)

So, if there are all these good ideas out there, why aren’t they being implemented by public transport operators and cities more?

Michaelson pointed to two problems: (1) development of new transit facilities takes a long time; and (2) people are resistant to change.

(AN: I think this is a great equation. Without people willing to change there will be no innovation. I also think that this is a huge problem in the public transport sector. The unwillingness to embrace open data and new governance structures intended to improve regional coordination or comprehensive mobility programs are all examples of public transport’s conservative approach to business.

A good example was my being asked “Why would we want to buy a system that allowed customers to complain about our service?” when I explained my project GreenCitySreets.com to a public transport operator. I mean how 20th Century is that?)

Here are some links:

Please add your ideas to the comments!