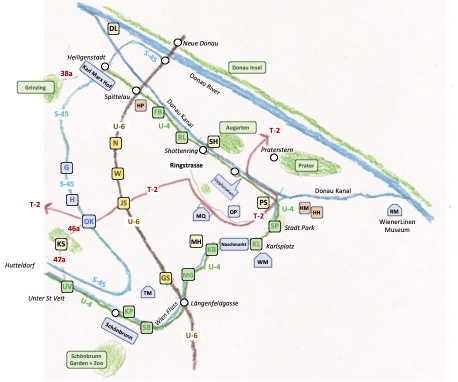 Otto Wagner (1841-1918) was a pioneer of Modern Architecture. In 1894 he began working on design of Vienna’s Stadtbahn (city railway). The Stadtbahn lines are still used by Vienna’s U-Bahn (underground) and S-Bahn (regional rail) systems.

In 2018, on the 100th anniversary of Wagner’s death, I led a Janes Walk tour on Otto Wagner’s architecture emphasizing the Stadtbahn. I’ve finally developed a schematic map of four walking tours each focused on a different segment of the Stadtbahn:

The map also highlights nearby Vienna attractions and museums. Stay tuned for more detailed descriptions of the tours. Comments and suggestions are welcome!