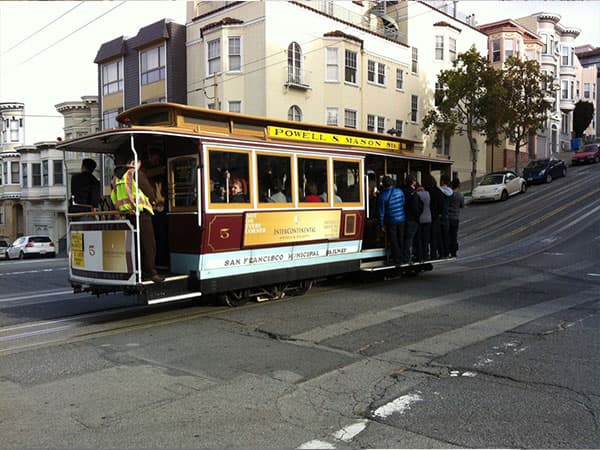 I used to be a frequent rider on San Francisco’s cable cars. It was a fun commute!

The ideas of frequent rider programs for public transport operators is intriguing. Jarrett Walker at humantransit.org has a great article today on the subject. (Jarrett quotes the Atlantic article by Alexis Madrigal about Stanford professor Balaji Prabhakar).

Jarrett’s point is that a frequent rider program is probably an overly complicated approach for helping shift demand from peak to off-peak service. I think he’s right.

Airline loyalty programs were started because trips on different airlines are essentially the same. The idea was to create a relationship so customers became committed to one airline through earning miles, status, upgrades. Since there is a huge qualitative difference between different types of urban transport (driving, biking, public transport, etc.), loyalty programs probably make less sense in this context.

But, perhaps loyalty programs could be used by public transport operators to create and support better relationships with their customers, not because these customers will ride more, but rather to increase the political effectiveness of public transport agencies in the public arena. Public transport needs committed advocates to support complex and controversial government policy (e.g. to build an exclusive bus lane).

Now what we need is an agency or organisation that will incorporate the GreenCityStreets tools into a supportive environment (i.e. an agency who will use the application to pro-actively listen and respond to customers – much as companies like Zappos do).