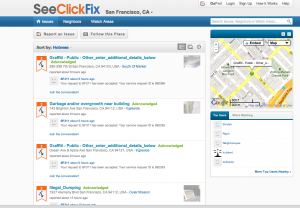 SeeClickFix is a great example of a crowdsourced reporting application.

SeeClickFix a leader in developing applications and software allowing residents to report issues (crowdsourcing) to governments and agencies just celebrated it’s 2,000,000-th reported issue. Ben Berkowitz, the founder of SeeClickFix, just posted (2015) a short history of SeeClickFix and announced a new feature they are developing (expected 2016) that will allow the people reporting issues to communicate directly with each other to solve problems. Right now SeeClickFix describes issues on maps (and to local governments that subscribe to its feed) but does not provide tools for people to interact. Sounds like a great new feature for a fantastic application.