After my post Traffic Signals for Active Mobility several people sent ideas for and examples of using traffic signals to encourage active walking and cycling, so I thought it would be a nice idea to keep track of the ideas just in case someone decides to pursue the idea of developing a best practices summary in the future.

Self-controlled traffic signals (German) use sensors to detect how many vehicles, cycles and pedestrians are approaching from each direction and the optimization algorithm continuously recalculates signal timing to minimize stop time for everyone. The approach was tested in Lucern Switzerland during 2020. After implementation the average waiting time for pedestrian traffic at one intersection was reduced by 29 percent thanks to self-control, and by 18 percent for car, motorcycle and bicycle traffic (ETH Zurich Research Report – German).

Plus … no one gets mad waiting for traffic signals while no traffic is coming = less crossing against the signal and fewer complaints about the city not knowing what they are doing. 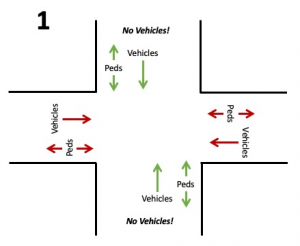 Sensors determine there is no vehicle/bike traffic approaching on up-down street.

It might be possible to exempt bikes from stopping and allow them to start crossing the up-down street with the pedestrians, but this would require some good cooperation from everyone. 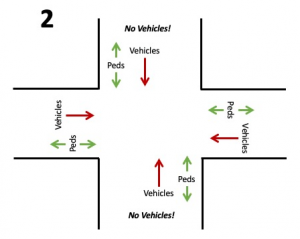 Real time all walk phases would be especially useful on one-way arterials where traffic often moves in bunches down the street, leaving relatively long periods where no traffic is coming. This encourages pedestrians to cross against the light (in New York this is practically standard procedure, but that doesn’t mean it’s not dangerous).

The photo at the top of this post shows one of these situations in Vienna. I was shocked to see a person pushing a baby carriage cross against the light.

The idea of using mobile apps to influence traffic signal timing and/or phasing to provide advantages for pedestrians and cyclists has been evaluated in several research projects and prototype applications. The idea is similar to vehicle-based systems (e.g., traffic signal priority or emergency vehicle priority) but using personal devices carried by pedestrians and cyclists.

The Netherlands has a program where mobile phones are used to alert smart traffic signals about approaching cyclists and other roadway users. The BITS Project has an interesting news item describing the real-time system and how smart traffic signals have been hacked by researchers. The BITS project also describes a program called SnifferBike in Utrecht which uses mobile phone data to evaluate route choice and delays cyclists experience at traffic signals. BITS – Bicycles and ITS is a great source of information on ideas for using traffic signals and other technology to support cycling. Here’s an article from BITS on using sensors to detect groups of cyclists (“pelotons”) and use the data to influence traffic signal timing to encourage cycling: Better flow for cyclists thanks to link with ITS technology.

A recent product called PedPal, has been developed by Carnegie Mellon University, with funding from ATTRI. It is a mobile smartphone application that enables pedestrians to communicate directly with signalized intersections and to influence traffic control decisions to their advantage. PedPal combines emerging connected vehicle communication technology with a recently developed real-time, adaptive traffic signal control system to provide for a safer and more efficient intersection crossing experience for pedestrians with disabilities. 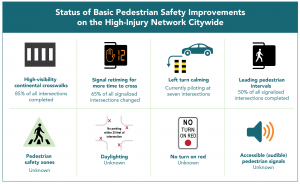 It’s intuitive that safety would have an influence on peoples’ desire to walk or ride a bike. Here’s a very nice graphic from Walk SF’s Report on the Status of Vision Zero in San Francisco. Notice they all involve traffic signals and intersection design.

There’s been lots of research on perceived safety and cycling, especially interesting are studies using the four types of cyclist model that use a measure of cyclist traffic stress … how stressed out cyclists feel riding in a particular location … in the planning process.

I’d like to make this an updated list of ideas. So please send your ideas or comments to the above and I’ll update this post in the future.